John Huston’s ‘The Maltese Falcon’ in Association with Punkt 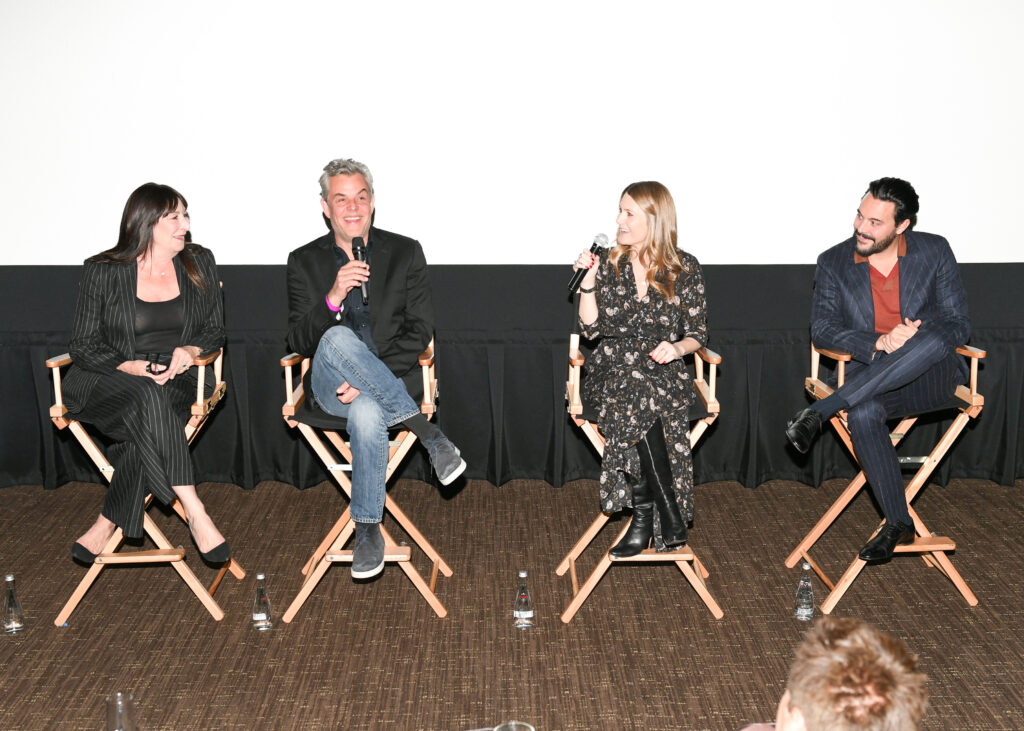 Angelica: Thank you for coming out tonight to see Dad’s movie, The Maltese Falcon. (Clapping) Especially thanks to our sponsor, Petter Neby from Punkt., Kimvara Balfour and to Katrina Pavlos, the founder of Grand Classics who is sadly unable to be with us tonight.  I’d like to read from a letter she wrote to me yesterday.  “Dear Angelica, Danny and Jack.  I just wanted to write a quick note in advance of tomorrow night.  From the bottom of my heart I thank you so much for hosting the extraordinary Grand Classics evening honoring John Huston….

Kinvara: We do have to be out of here in sometime so we’ll make it a quick conversation. Everyone knows everyone here. I just wanted to say, on behalf of Katrina, thank you guys for doing this. I know she was just so happy to see my family hosting sessions but it’s quite unique and I really want to talk about the film, but I also want to talk about you and your family’s dynamic and how that actually works. I have a question of when you’ve got all your projects and you’re all talking do you share ideas with each other or do you keep things to yourselves. I want to ask how it works as a family. But, let’s start first with just talking about the movie and the legacy that it had for each of you in your career and in your life that was something that your father created that has lived on and on and on. So whoever wants to start.

Angelica: I’ll start because I came first out of this group. I measure the Maltese Falcon by my first dog who I used to run after, I mean other than The Treasure of Sierra Madre which my first dog used to run after the donkeys when they ran away, I think the second most watched movie in my father’s library was Maltese Falcon in our house in Ireland. We watched the Maltese falcon over and over and over again. I was never quite sure what it was about except that Mary Astor cried and it was incredibly beautiful and the guys were tough, but it signified beginnings with Maltese Falcon.

Danny: Yeah I remember the big p….. that would go on and the projector would be set up in the house in Ireland and that the film would be laced. And the inevitable break in the film which would create all the more magic…Yes, we talk about our father together all the time. And we talk about other people’s films as well. The magic, I remember my father describing it as a film that captures people with light and that eventually it will be projected by another beam of light onto the screen. And that is something of value that will live on… And there is something magical about the screen and the films, and seeing them again with friends. In a way the ghosts from the past come back to life and that’s a beautiful thing, and in the flesh and blood… but simply bringing these wonderful actors and good work back to the present where dialogue is action. In a sense people like Bogart . My grandfather Walter, who gave my father his first feature …. plays a cameo of the Captain that comes in with the falcon and falls to his death. That was what my father had from his father, my grand father, your great grandfather (to Jack).

Kinvara: How is the film as you’ve all directed, and performed and acted, how has the film perhaps influenced your work as a director? Or for having your father’s work in your life influenced you?

Jack: I was young, very young when my father played me, it was one of three films; Treasure, The Man Who Would be King which was quite light and fun for me as a child and The Maltese Falcon. And I think, it was really the first time I saw the magic of cinema that I remember Peter Lorre having a profound effect as a character actor… and his voice and that you can really sort of get into something. I remember just being… and you know that made me feel… And my children will get to watch their Great Great Grandfather on the screen and that is sort of remarkable.

Angelica: I think my Dad making movies influenced me maybe more than the actual movies themselves. The way he would work with actors, his awareness of what was going on around him, his devotion to what he was doing. I don’t know if it was the same then on Maltese Falcon as it was later on in a film like the Dead. But his complete absorption in exercise, movie making, of the work of movie making that was so compelling about being around him in those times. He’d sketched out his ideas. He always had a pencil in his hand or pen in his hand. H was always working through his ideas. And I think that was one of the things that really instilled a respect for work. Work. Master work. In the way that he completely absorbed himself with it. Yeah, you know things that Dad said like; “An honest man speaks fast.” That’s a truism you know that you don’t really work out until you hear it. But things like that, little things come to mind.

Danny: What I know about Maltese Falcon is that it was very structured in the sense that he storyboarded a lot. It was a real strong sense of what it was that he wanted visually. It’s the third version. Of the same… He always said; ” should we make good films, we make the bad ones. Make them good. This is a film which was incredibly successful in a good way. Advice he gave me once was: when you look from left to right and right to left. What do you do?

Danny: You blink. That’s the cut. Concentrate on what it is that you are trying to say. Tell the story. When you watch this film tonight, you’ll see how careful the angles are. And how everything in this sense, has only one way to tell it. It’s a very precise point of view. It has this thread which I’m sure I don’t know if Dad would agree with me, but it has this thread which is a story about a quest that is lost. There is a sense of failure, failure in the characters but finally they go on and continue. And if you look at Bogart’s performance, you can see the tendency he has towards making the wrong moral decision. And his, all of us as human beings, our delicate nature when it comes to greed. The Falcon, I think is the thing that dreams are made of. Which is a theme that is very visible in most of his work.

Kinvara: I think we are being told that we have to wrap up. I was just going to say, if you thought to work together… because that would be so great because you are all so great…

Danny: Well thats the thing, when I used to say to Dad, well I’m not sure if it’s a cool thing you supporting me and helping me out. He said, well that’s what my father did for me, that’s what Walter did for me and the Maltese Falcon. So I think we all like Nepotism. Yeah.