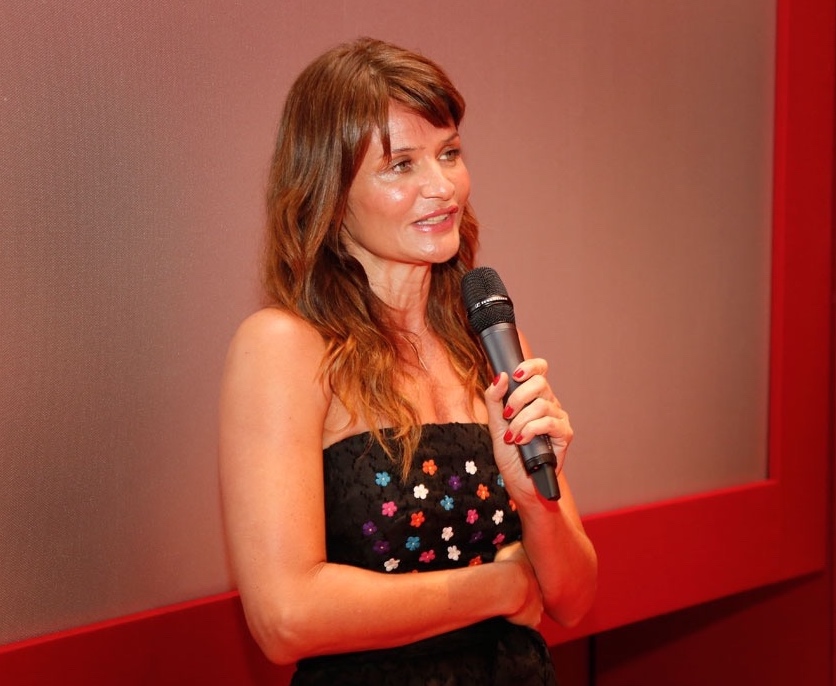 “I am very honored to be here tonight and to be in Miami, which is a city that I love. I have eben coming here since I was born. My dad’s family lived here for many years and some are still here… So I would spend all my favorite childhood summers in Miami, which is not the worst place to be. I definitely have a special love for this place and to be back and present a movie that means so much to me in many ways… I was sixteen years old, and for the first time  allowed to be alone on a tent trip with my girlfriend in Denmark […] Well my grand parents lived 5 min away but still, very adult, and on that camp trip I met a German boy who was 18 and fell in love with him and it was a very innocent love, where we just met at the camp fire and you know spoke and sort of smiled at each other. On the last day he handed me a book and it was Bonjour Tristesse by Françoise Sagan and he said “this is my favorite book, I want you to read it and I want you to think of me when you read it.”

“I never saw that boy again by the way…but the book stayed with me and the story stayed with me. I read it right after and I probably read it once a year since then and I’ve seen the movie probably once a year since then. Because there are always new people that I don’t know…no sorry. Always people that I know who hadn’t seen the movie and it’s a really beautiful and sort of very profound thing to share to them so the movie, the story: a young girl who lives with her wealthy father and they spend summers in the south of France. They have a very peculiar relationship, which I don’t know, I don’t find it that peculiar anymore because I have seen it so many times and I understand it and there are layers to this movie which you will maybe not understand the first time you see it but hopefully you will also go back and see it again. If not only for the incredible outfits that Givenchy did. He did the entire wardrobe. The movie was done in 1958 I believe. Otto Preminger and with David Niven, Deborah Kerr, Jean Seberg, who is also one of my favorite actresses, and the other ones as well. Amazing symbiotic relationship between them as actors and as human beings in this movie. It’s a very strange story and it grips you. The last scene in the movie, literarily I have goosebumps saying this, always gets to me. It is a very very potent moment and the way that it…I don’t even know how to describe it but there is a sad stillness to that end that just literally will stay with you. It’s kind of yeah… it’s very special. Half the movie is in black and white, half the movie is in color, which was very very ground breaking for the time it was done, and there is a reason for that as well, which you will discover. “

Directed by Otto Preminger and released in the spring of 1958, Bonjour Tristesse inspired by the classic french novel by Francoise Sagan  is known shown through a cinematic lens. The classic stars Jean Serberg, David Niven and Deborah Kerr.  Anne (Deborah Kerr) travels to the French Riviera to visit Raymond (David Niven), the wealthy husband of her recently deceased friend. His pampered daughter, Cecile (Jean Seberg), afraid that the prim and proper Anne’s visit may alter their hedonistic lifestyle, attempts to drive a wedge between the woman and her father, with the help of his young French mistress, Elsa (Mylène Demongeot). Little do they know that Anne’s attitude hides a fragility and pain that may have tragic consequences.