“I was riveted from the opening shot until the end… And there was something about Orson’s sense of theatricality which really had no business in Hollywood.” 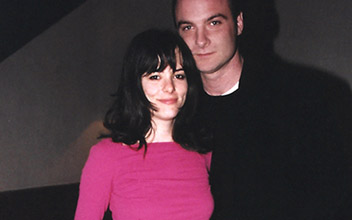 Grand Classics launched in lower Manhattan, with Liev Schrieber hosting the inaugural event. Liev chose Citizen Kane (1941) as the film that most inspired him. What better way to launch the film series, than with the movie that the American Film Institute has listed as Number 1 on their top 100 movies of all time.

“When I was growing up on the lower east side… at 80 St. Marks there was a theater that showed black and white films. My mother and I had a long running argument that I think the reason she took me there was because it cost $2 to see a film, and she says it was because nothing was worth seeing that was made after 1950…”

Citizen Kane was the third film that I saw at 80 St. Marks… and I already knew because I’d fallen asleep the past few times that I’d fall asleep again, especially because it had a word like “citizen” in the title. When you’re 7, that word means that it’s a bad movie. But I saw it and I was riveted from the opening shot until the end… And there was something about Orson’s sense of theatricality which really had no business in Hollywood. That was something about him that really moved me as someone who studied theater and later started going into film was that you really could do these things on film. Not everybody has a career like he had on Broadway and then does “War of the Worlds” and then is offered carte blanche into Hollywood and that is why he was able to do Citizen Kane… He was 24 yrs. old when he made it and he plays a character who ranges from about 18 to late 60’s…. I think of him as the father of independent film.”

“I was riveted from the opening shot until the end… And there was something about Orson’s sense of theatricality which really had no business in Hollywood.”

Citizen Kane (1941) was Orson Welles’ film directorial debut at the age of twenty five. Widely considered one of the greatest films in cinema history, it broke the mold with its unusual camera angles and pushed the envelope in the way audiences viewed film as an art form.

Citizen Kane is the story of Charles Foster Kane (Orson Welles), an ambitious newspaper tycoon who dies alone in his palatial home Xanadu, whispering a final word “Rosebud”. To unravel the mystery of Kane’s life, a reporter is sent to try and discover the meaning of “Rosebud”. Spanning from the early beginnings of Kane’s childhood, to his tragic and lonely death, the people who worked and lived with Kane tell their stories in a series of flashbacks that reveal much about Kane’s life and the gradual loss of his soul.

Although Citizen Kane was a commercial failure, it was nominated for nine Academy Awards in 1942 including Best Picture, Best Director and Best Actor. It won the Oscar for Best Original Screenplay.